Robert Leroy Johnson:Deals with the devil in Popular Music Today?

The story about musicians selling their soul to the devil I only half believed with when I acknowledged the string of suicides that took place amongst rock musician (and then I thought it only applied to rock musicians). It was Robert Leroy Johnson who according to legend made a Faustian bargain with the devil at the cross roads of Dockery Plantation. A large black man(devil) met h 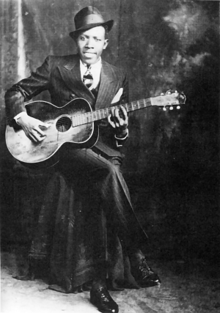 im there took the guitar from him tuned it played a few songs and then gave it back to him supernaturally given him the mastery over the instrument.

When we look at the interviews of Bob Dylan in 2004 he pretty much comes straight out and admits that he made a deal with 'destiny'. He calls the one he made this deal with with the "chief commander of this world and the one we can't see.." not the chief commander of the next world as Christians would say. Yet to be clear in a much earlier interview he flatly claims that he is not religious and doesn't 'believe in anything'.

There was of course John Lennon consistent attack on the Christianity by stating that The Beatles were bigger than Jesus and of course the song "God" in which he sings that God is merely a concept and that he does not believe in Jesus (amongst other spiritual beliefs). However, surprisingly(or not) the trend seems to continue with rapper Jay-Z in which the rapper writes the following lyrics, 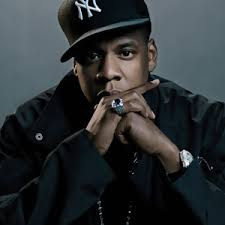 "Hail Mary to the city your a Virgin, and Jesus can’t save you life starts when the church ends,"


Why such an anti-Christian message, it would seem unnecessary, one would think that a performer like Jay-Z can be successful without using any religious references at all. 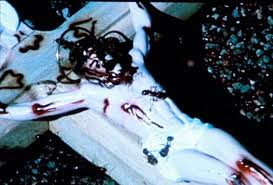 However, more and more it seems as if artist can't get by today without making some mention of religion. Albeit, religion is very much in the spot light but one would imagine that there would be no cause for the enmity that artist display, particularly for the Christian faith. The Smithsonian's latest art exhibition for instance was effectively a gay one, with what has been dubbed 'A Gay Christmas Show'. One would think that the gay community had something other to focus on than desecrating sacred objects of the Church (and they do, it is usually naked men)they set up this display , a photograph really on the crucified Jesus covered in ants, (what the symbolism is suppose to mean is the artist participation in the suffering of Jesus)by David Wojnarowicz's entitled A Fire in My Belly from the NPG's exhibition, "Hide/Seek: Difference and Desire in American Portraiture."It seemed nonetheless similar to the "Sensation" exhibit which ran from from 2 October 1999 to 9 January 2000 at the Brooklyn Musem here in New York, w 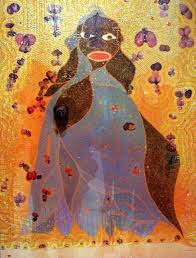 here there was a piece of art (so-called) entitled The Holy Virgin Mary by Chris Ofili. The work is a painting of the Virgin Mary covered in elephant dung of course drew the ire of then then Mayor Rudolph Giuliani, William Donahue of the Catholic League and Cardinal O'Connor who was then Archbishop of New York.

Certainly there is an animosity between the artist and the religious as Jesus proclaimed there would between who prefer their immediate carnal lives over salvation. There are those who are simply the cockle of the field sowed by the devil who hate Christ no without reason. (Matthew 13;38) Many of us would like to believe that the World does not hate Christian or that without religion we will simply live in a world where, as if we were living in a giant shopping mall, we will all simply be working and purchasing what we want happily going about our daily lives, without the tedium of religion and any thought of God. Yet, 'power abhors a vacuum', and without God mere mortals would be left to the devises of God knows who in the spiritual realm, certainly Satan. During this advent season when we prepare for the coming of the Lord, let us take stock of our lives and the content there within, the music we listen and the conscious realization that in deed, the end soon draws near and we ought to contemplate the last things, death, judgment, heaven and hell. Let the Christian remember Christ suffering and his word about this world rather than effectively dismissing Christ with a polyandrous, puerile and rudimentary thoughts that 'Christ loves everyone', particularly when we know for certain, not everyone loves Christ.

John 15:20
Remember my word that I said to you: The servant is not greater than his master. If they have persecuted me, they will also persecute you: if they have kept my word, they will keep yours also.

Posted by thatcatdavid at 11:10 AM